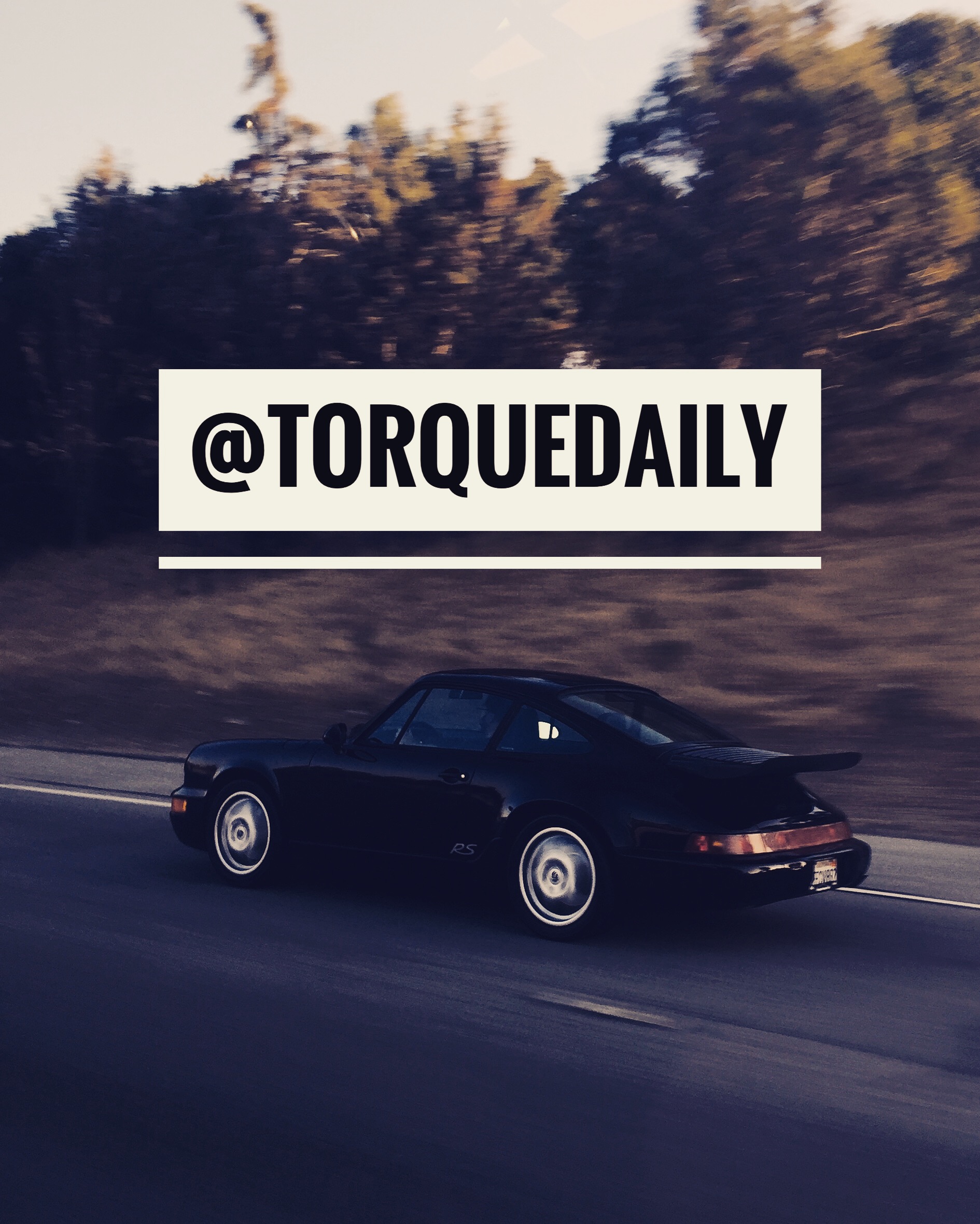 Extravagance, optimism and achievement in the era of austerity. 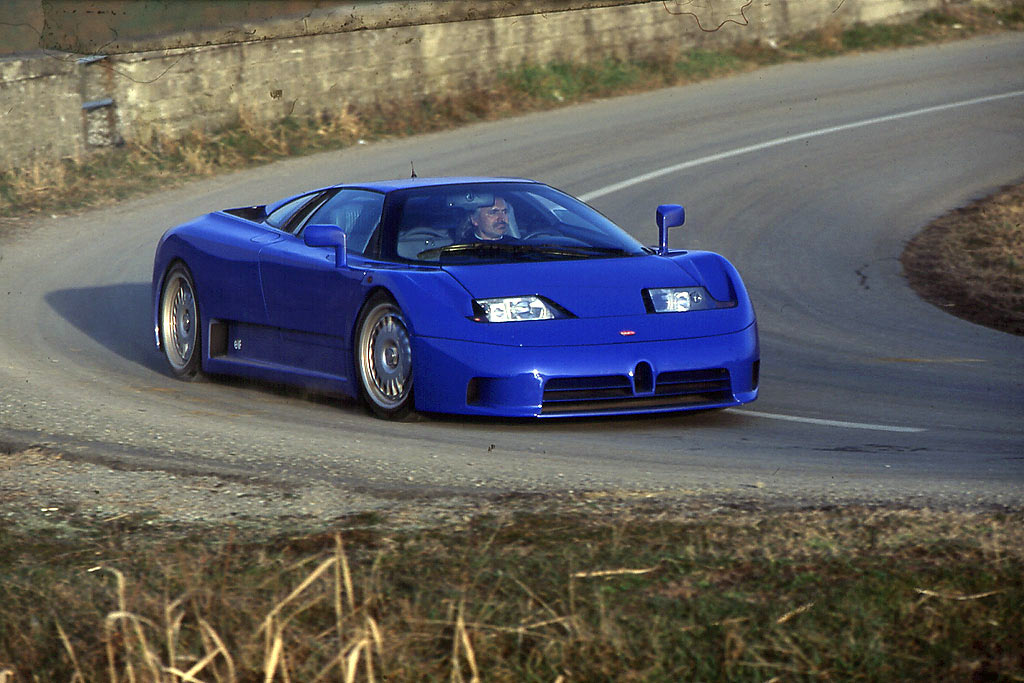 In 1987 the most renowned supercar designers, engineers and entrepreneurs would embark on a tumultuous journey to revive one of automotive history’s most revered names, Bugatti. Dormant for almost half a century, a marque associated with the construction of cars of the highest technological and artisanal echelon would make a spectacular return. 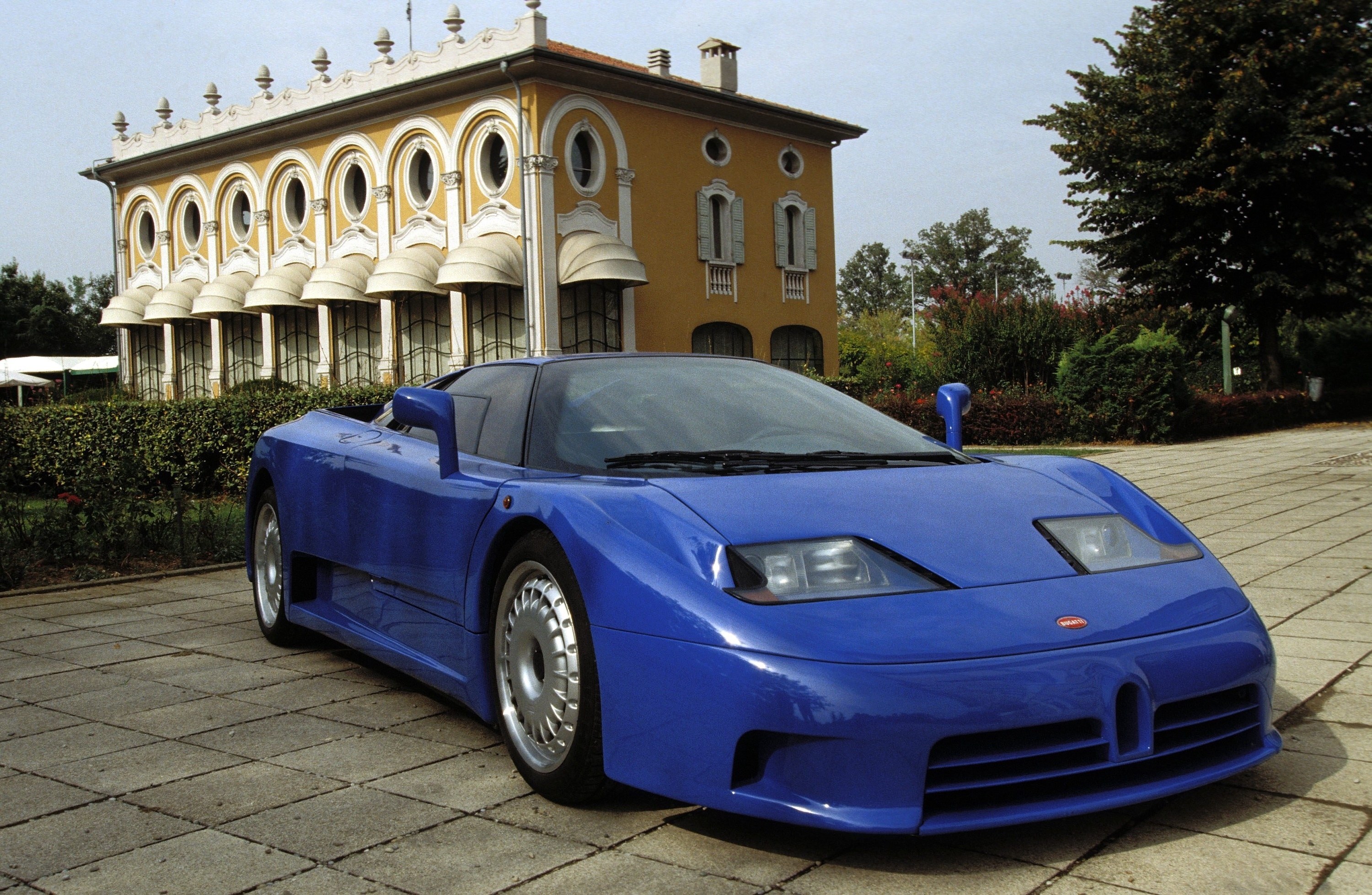 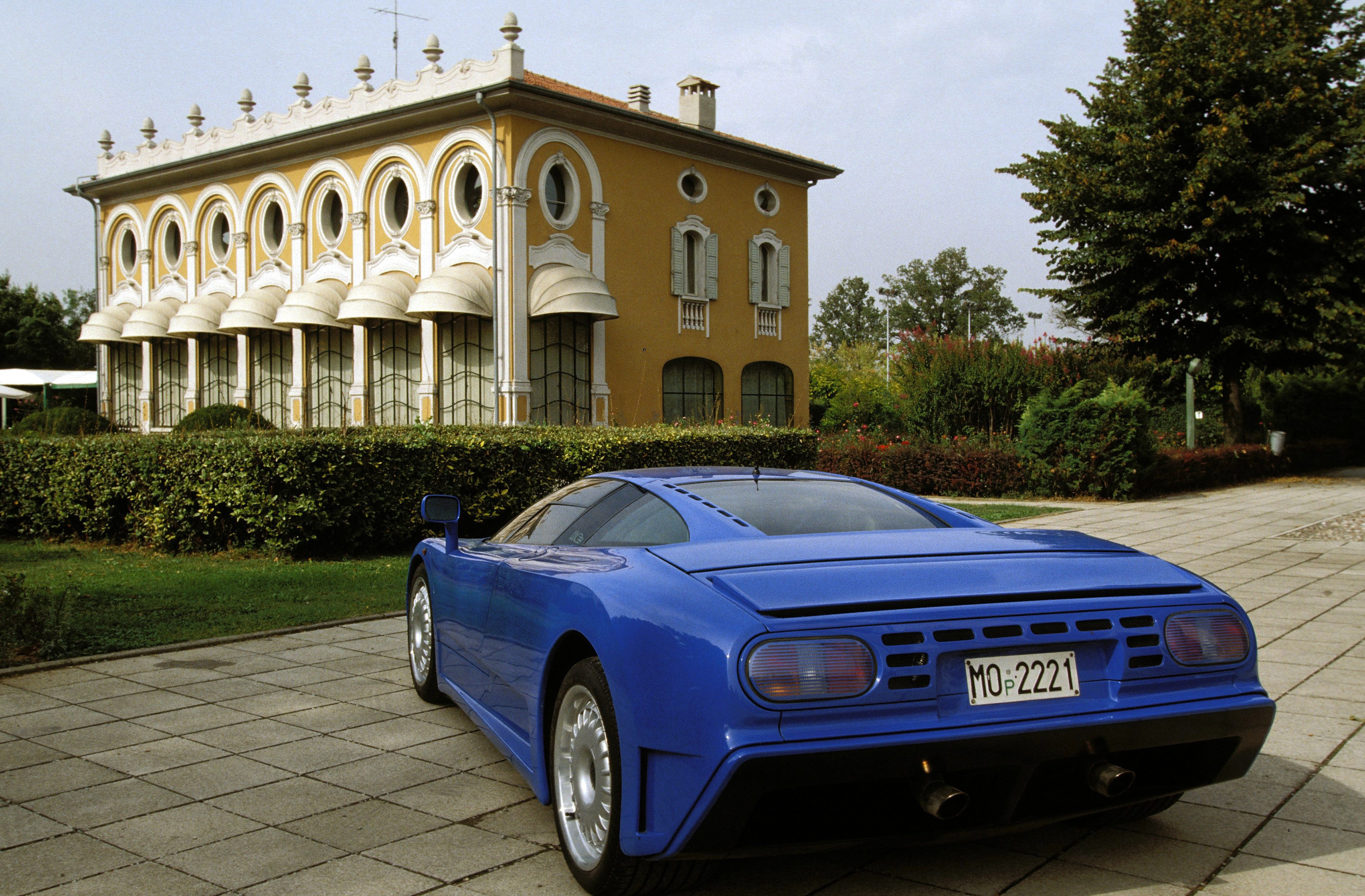 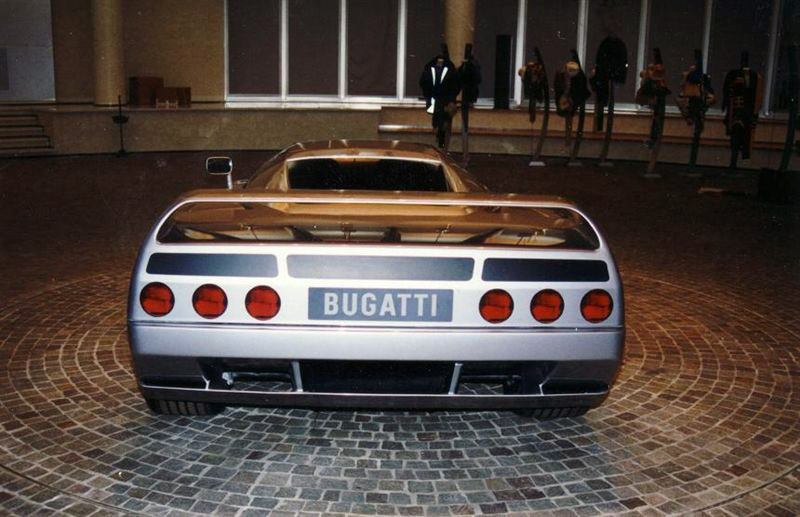 I’ve been wanting to share the highly fascinating history of the short lived Bugatti Automobili for a rather long time. Today the Bugatti name is synonymous with exuberant engineering, immense speed and cost but there was a time when this historic name lay dormant for almost forty years in the wake of destructive global conflict and the deaths of both its founder and leading light, Ettore Bugatti and his son Jean. Hence, the story of its revival is enticing, convoluted and instigated by the unbridled passion and determination of several key figures, most prominently that of Romano Artioli, an affluent owner of Ferrari and Suzuki franchises in Italy and Germany and the efforts of some of Italy’s most talented mechanical engineers, designers and artisans.  The modus operandi of the revived Bugatti marque circulated around building a car that Ettore himself and his company could have built had their cars continued to evolve, being of the highest possible technological standard, crafted from the most sumptuous and expensive materials and built in a facility that complimented the expertise and expense of the motorcar itself. (More on that last part later!) In 1987, Artioli would acquire the rights to utilise the Bugatti name and set forth with Paolo Stanzini formerly of Lamborghini and distinguished French historian Jean-Marc Borel to resuscitate the long dormant marque, supplemented by some well guided prodding by even Ferrucio Lamborghini. The first of a series of logistical challenges that presented itself was where the new Bugatti entity would be based and how this would in turn affect development, production and the heritage of the brand. The historic home of Bugatti had long been nestled in Molsheim, North-Eastern France, a location that Artioli had wished to return to maintain a historical connection but building such an advanced motorcar was no easy feat and thus he was reliant on the Modenese, eventually choosing a site in Campogalliano where his relative, the architect Giampaolo Benedini, would create a marvellous sprawling avant-garde facility, the most famous element being known as “La Fabbrica Blu” (The Blue Factory). 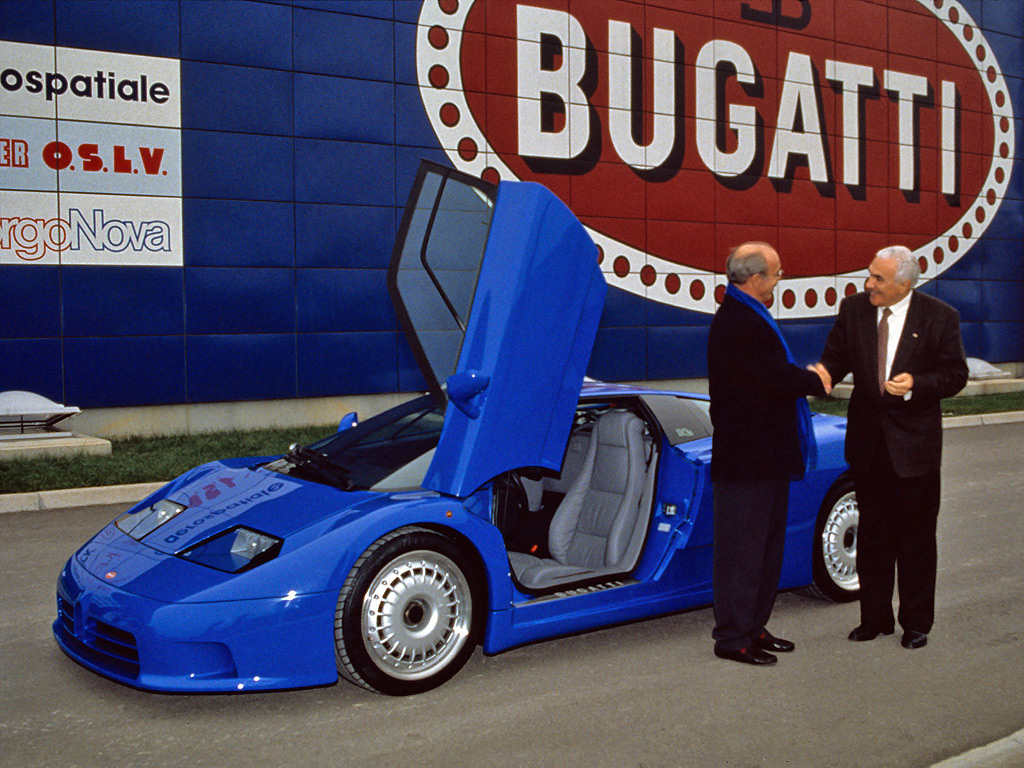 By 1989, two years after the rights to use the Bugatti name had been acquired, proposals were commissioned to four Italian design houses in order to determine the final form of the car which would metamorphose rather a few times until its eventual debut in 1991. Paolo Martin whom had designed such iconic cars as the Rolls-Royce Carmargue and Ferrari Modulo adopted quite the radical approach in conceptualising what a modern Bugatti may look like, adorned with a sliding cockpit and highly distinctive if ungainly rear wing that protruded at a very high angle. This avant-garde design would ultimately suffer the same fate as its counterparts, being deemed too far removed from the Bugatti heritage. Giugaro’s effort with the ID 90 was could be described as peculiar but very contemporary and cohesive, a design that would later influence such cars as the BMW NAZCA V12. Giugaro himself would later go on to design the EB112 super saloon of 1992 that indeed never came to fruition as a production vehicle. The model presented under Nuccio Bertone by Deschamps is to my eyes at least, one of the most intriguing, as the car manages to look radical yet simultaneously refined and aesthetically cohesive with well integrated aerodynamic features that hadn’t been seen on production cars to quite the same extent. While it was quite an enticing design, its shape wasn’t necessarily recognisable as a Bugatti, and with the aim to tie together the past of Molsheim to the present in Campogalliano, the wedge design by Gandini was chosen which would by further explored by Paolo Stanzini and the engineers of the marque, forming the basis of the five aluminium prototypes. However, there was a caveat! Disagreements concerning the direction of the project erupted, culminating in the departure of Stanzini and leading to an extensive re-evaluation of the utilisation of an aluminium chassis and the aesthetic elements of the car. The Gandini design was regarded as somewhat outdated in its overt wedge profile, supplemented by the engineering team making one of the most pivotal decisions in the entire development process. The switch to a carbon fibre chassis, which would be manufactured by French aerospace firm, Aerospatiale. The first Aluminium prototype (A1) would gain a new lease of life as a styling model to explore how the Gandini design could be refined to make it more overly distinctive as a car following in the Bugatti lineage, while retaining its feasibility as a production car. The task ultimately fell to Artioli’s cousin, Giampaolo Benedini, the architect of the sprawling modern facility where the car itself would be built. The jagged lines were refined into curvaceous contours, pop-up headlamps replaced by integrated aerodynamic fixed lamps which would be supplemented by other accoutrements including a subtle Bugatti horseshoe grille. Ultimately this refined exercise would go forth to become what we all know as the production EB110. After many years of toil and difficulty, in 1991 at Place de la Concorde, the car would be officially debuted with the helping hand of Alain Delon to worldwide acclaim. Bugatti was back. 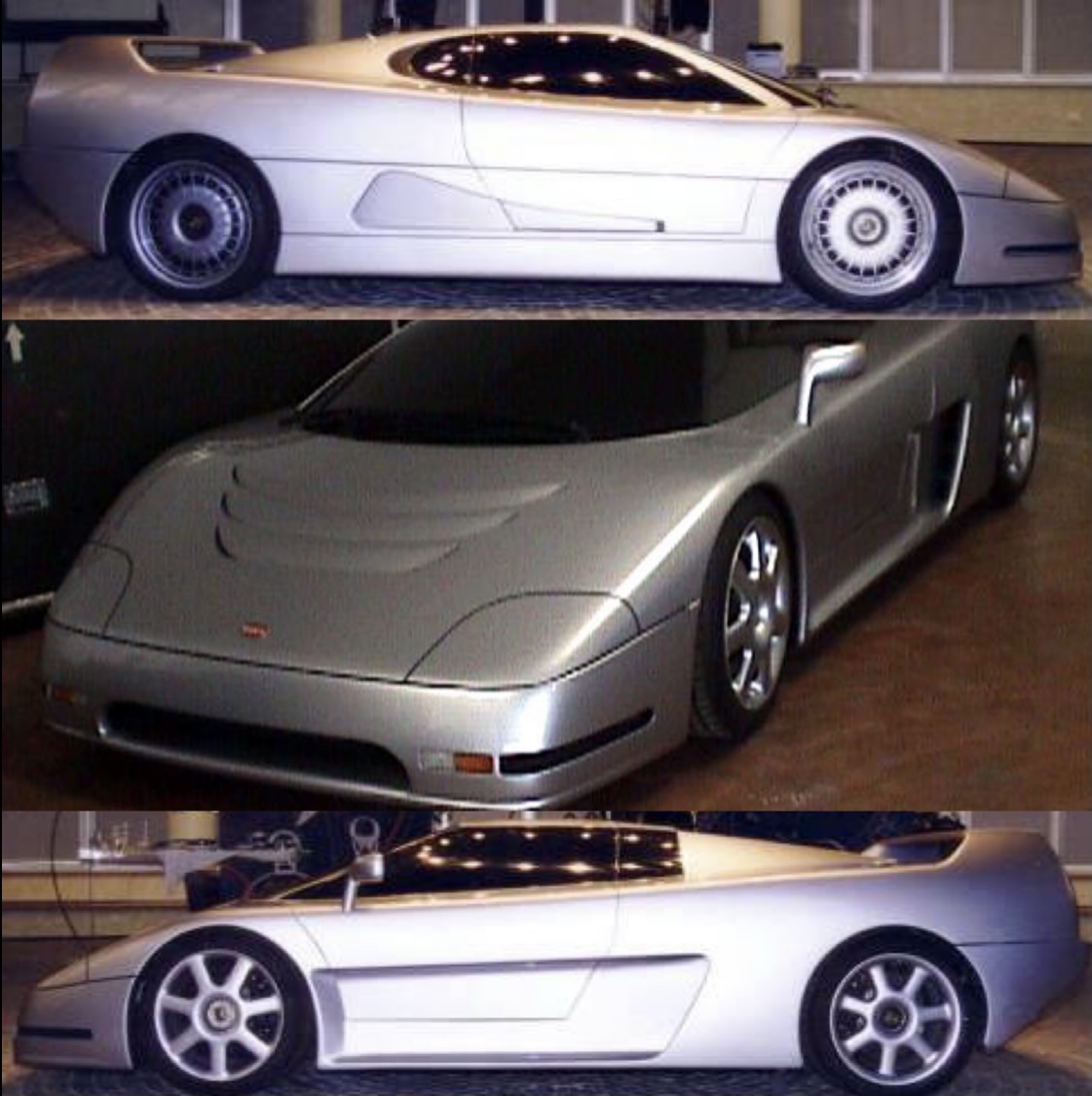 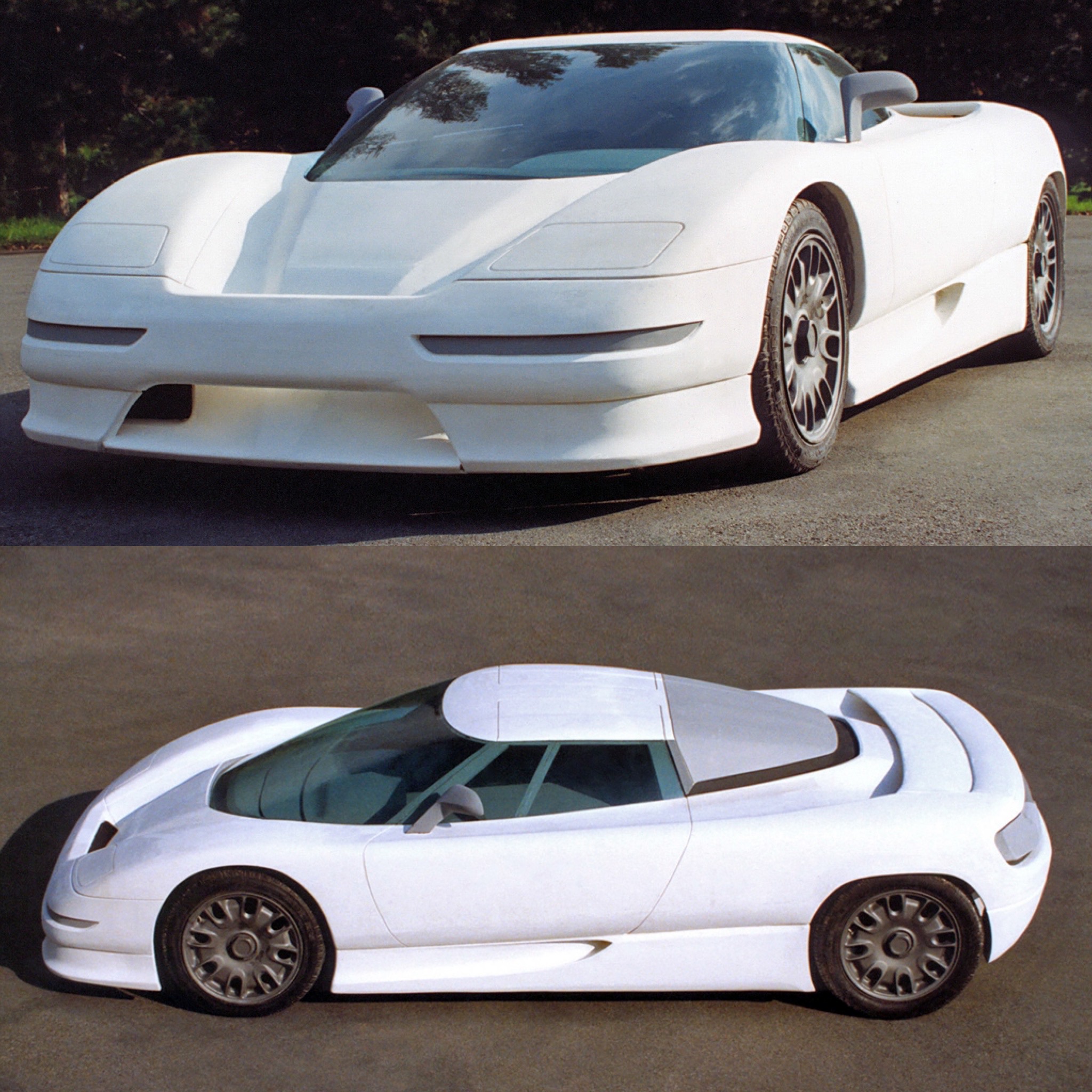 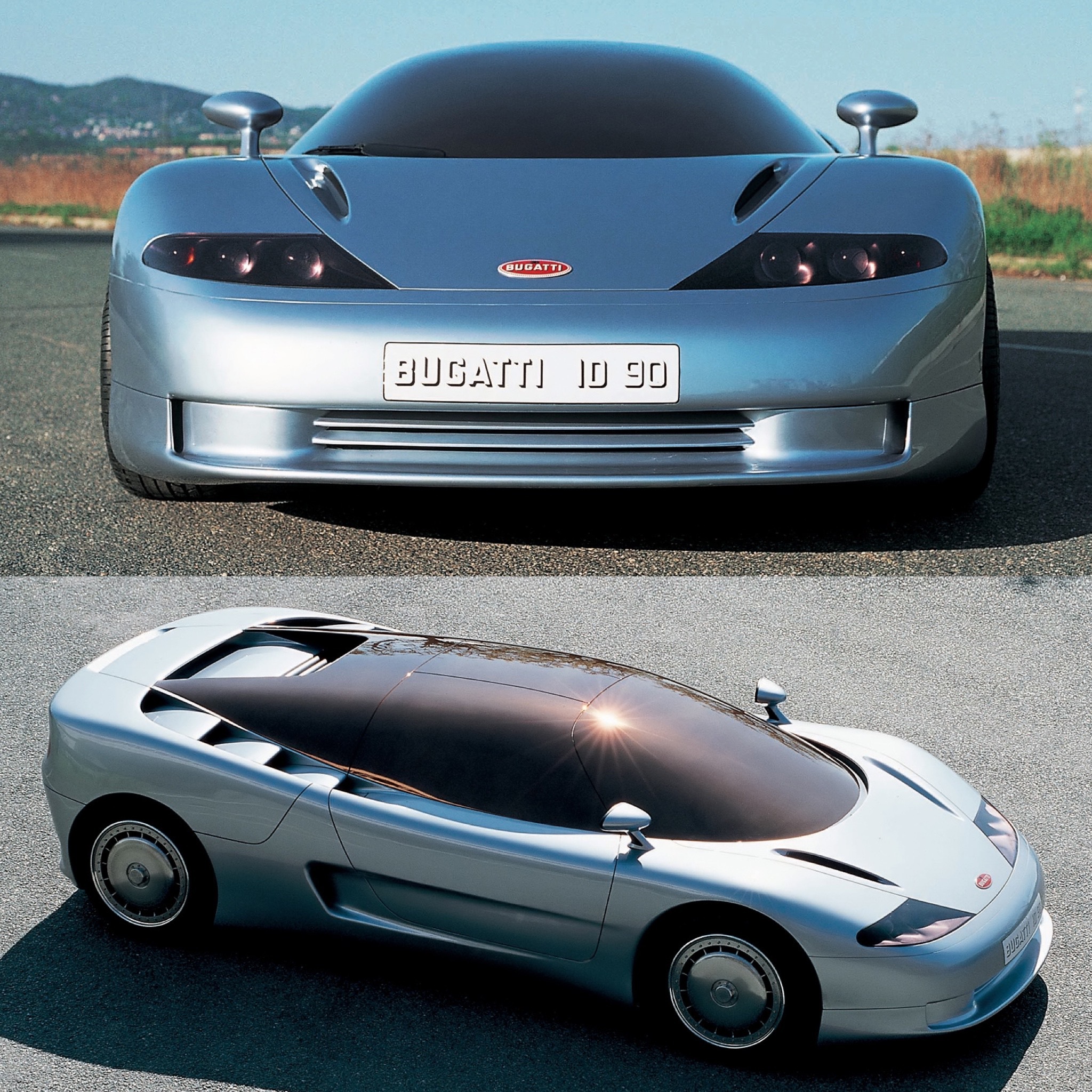 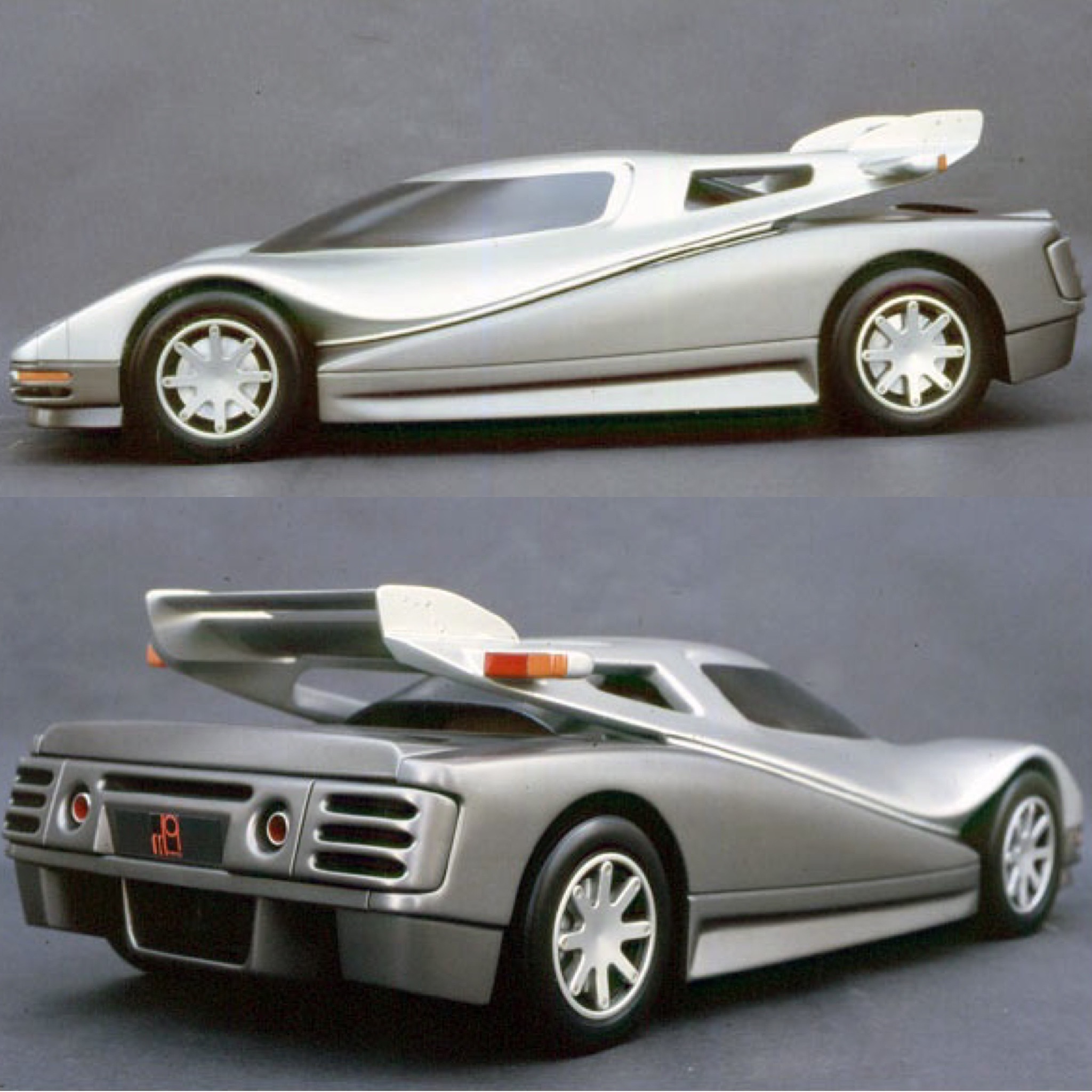 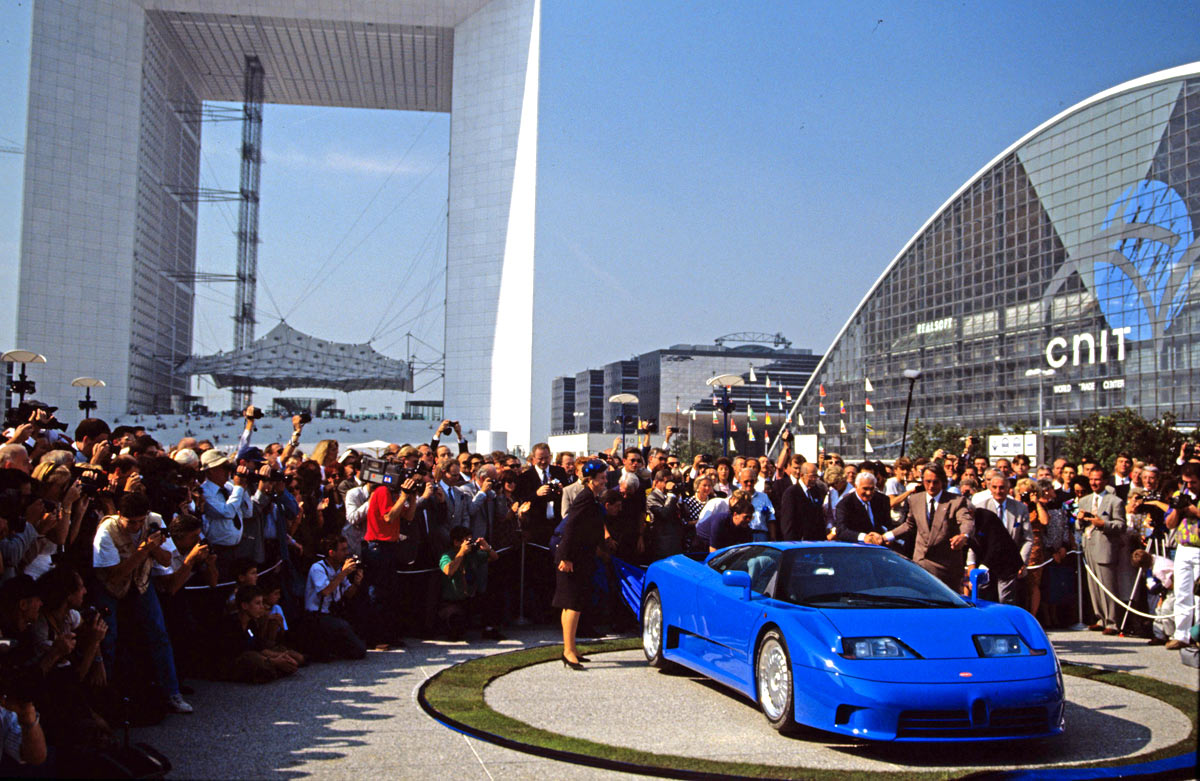 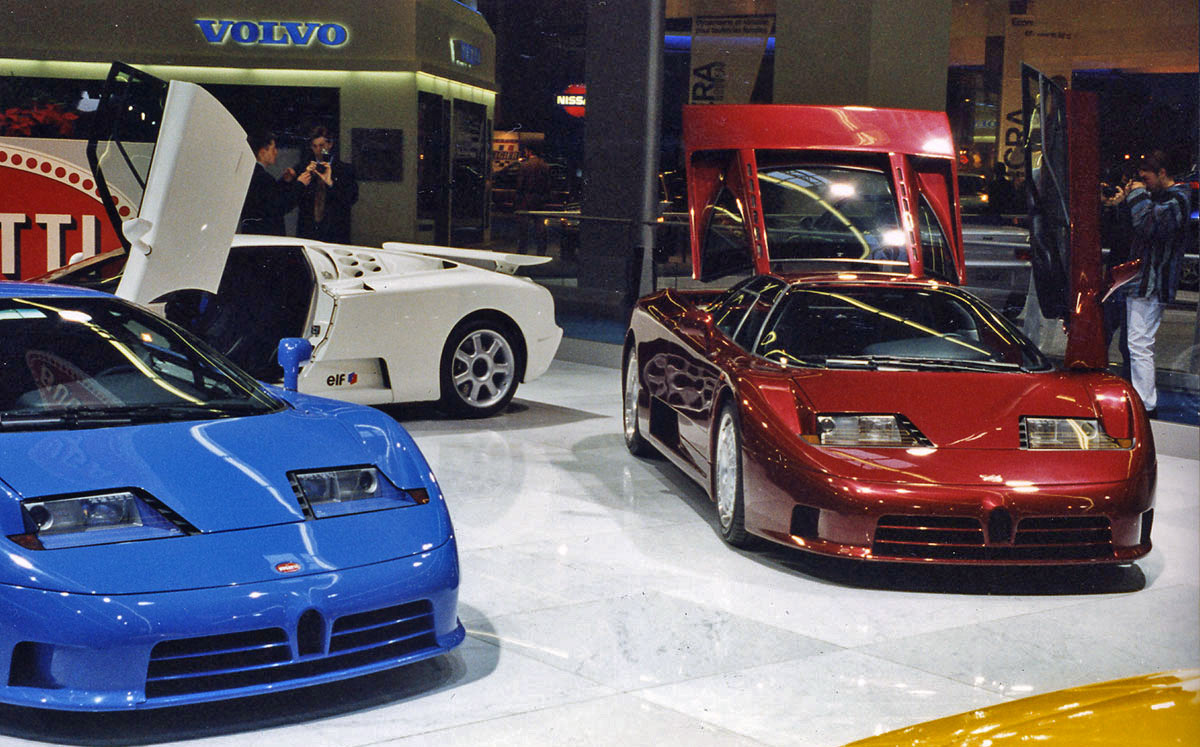 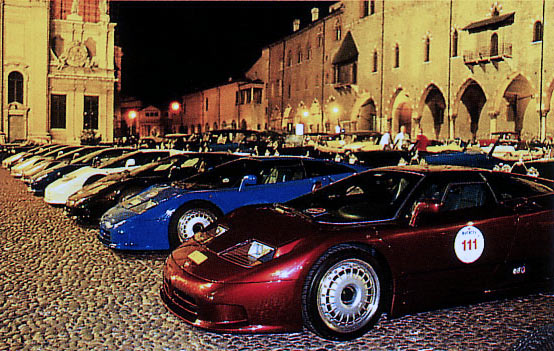 It is often said that one can have too much of a good thing, and if anything was to embody that statement to the fullest extent, it would be the ephemeral tale of Bugatti Automobili. Thus, I welcome everyone to the final instalment of the EB110 story that I shall be covering on Instagram, and I hope you’ve enjoyed immersing yourself in this truly enthralling automotive story.  On the 23rd of September, 1995, the neoteric factory would be closed, production stopped and an era for the historic marque would draw to an end. One of the most intriguing elements of the company’s last operational days, is that several of the unfinished cars on the production line were US-Spec EB110s. Until recently, the EB110 has acted as somewhat of a forbidden fruit stateside, but the car was indeed homologated, revised and planned for consumption in the US.  On the fifth slide in the complication, you will see a prototype of the EB110 “America” which included a slightly revised frontal fascia, customary reflective side markers which were supplemented by some other ancillary changes. This particular example would be paraded around the country for promotional purposes, and there were a decent quantity of orders taken. However, the steps taken to homologate and market the car included the purchase of Lotus Group, a decision carried out with the intention on making use of an existing US distribution network and sharing development costs. Despite this, reaching out to American shores would prove to be a futile venture that never came to fruition.  Another stillborn and ambitious project that showed promise was the EB112 super saloon. Perhaps the logical decision when deciding upon the car’s engine would have been to reutilise the marvellous 3.5-litre quad-turbo V12 from its stablemate, but it was not to be! Instead a bespoke 6.0-litre naturally-aspirated V12 would be developed, mated to a carbon fibre monocoque chassis and six-speed manual transmission, a host of features that could be deemed aspiring in supercars many decades later, let alone a practical luxury saloon. - Continued II - One other factor to consider from my point of view is that where the groundbreaking Bugatti EB110 may have perished, another offshoot of the short-lived company and its President would go on to prove itself as both a cultural and commercial victory until this very day. The venerable Lotus Elise. The purchase of Lotus Group from General Motors may have originally been carried out for fundamentally logistical purposes, this didn’t stop Artioli from launching to the world a car that indisputably saved the company and acted as a bedrock for its core model range for decades to come. Hence, in summary, Bugatti Automobili is a parable of extravagance, optimum and unprecedented levels of achievement in an era of austerity. I’ve throughly enjoyed being able to both immerse myself and hopefully others too by this recent story. Currently, I’m in the process of working upon a less sporadic version of this series which will be featured on my web page soon, including many aspects that haven’t been explored or omitted. 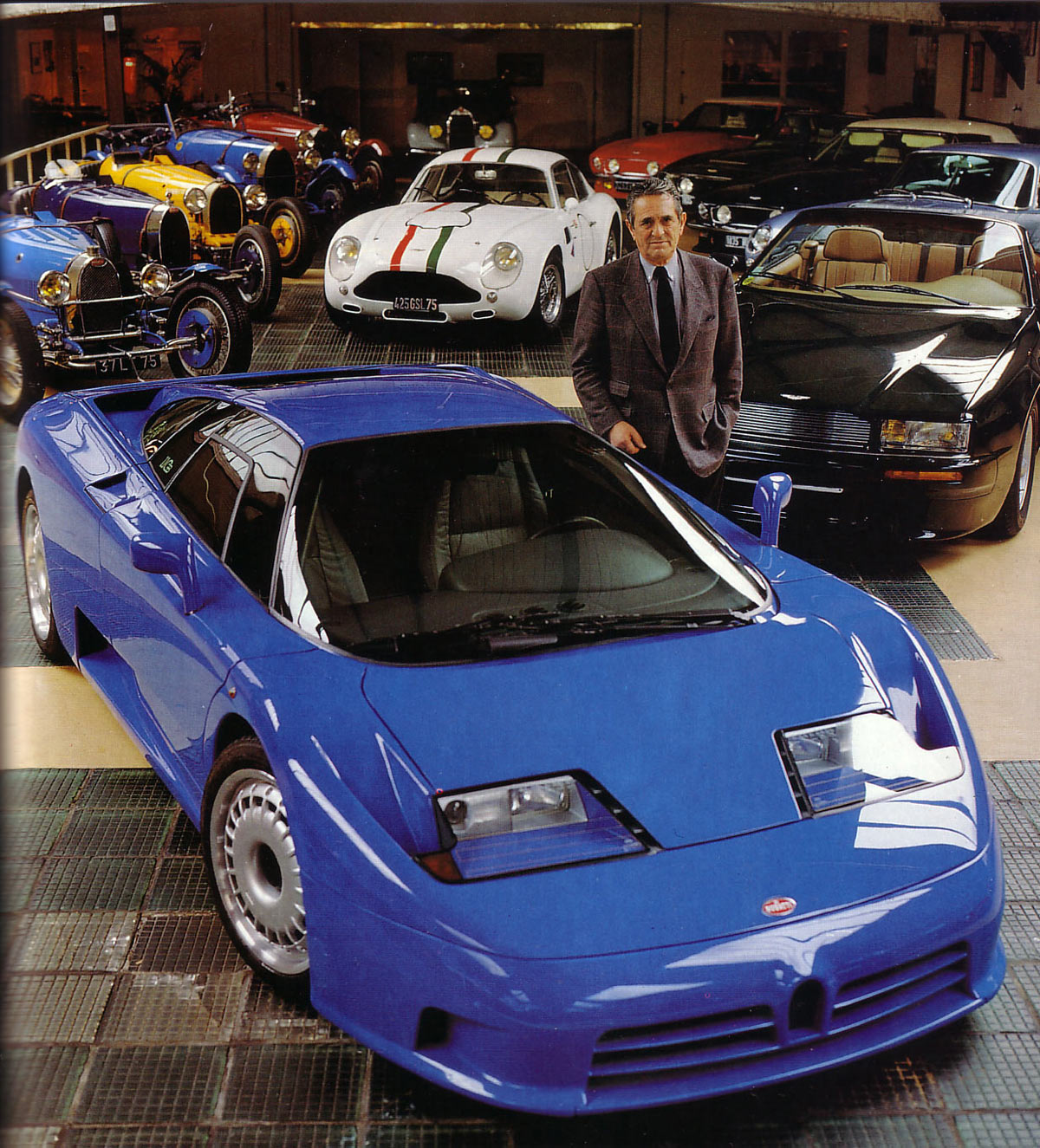 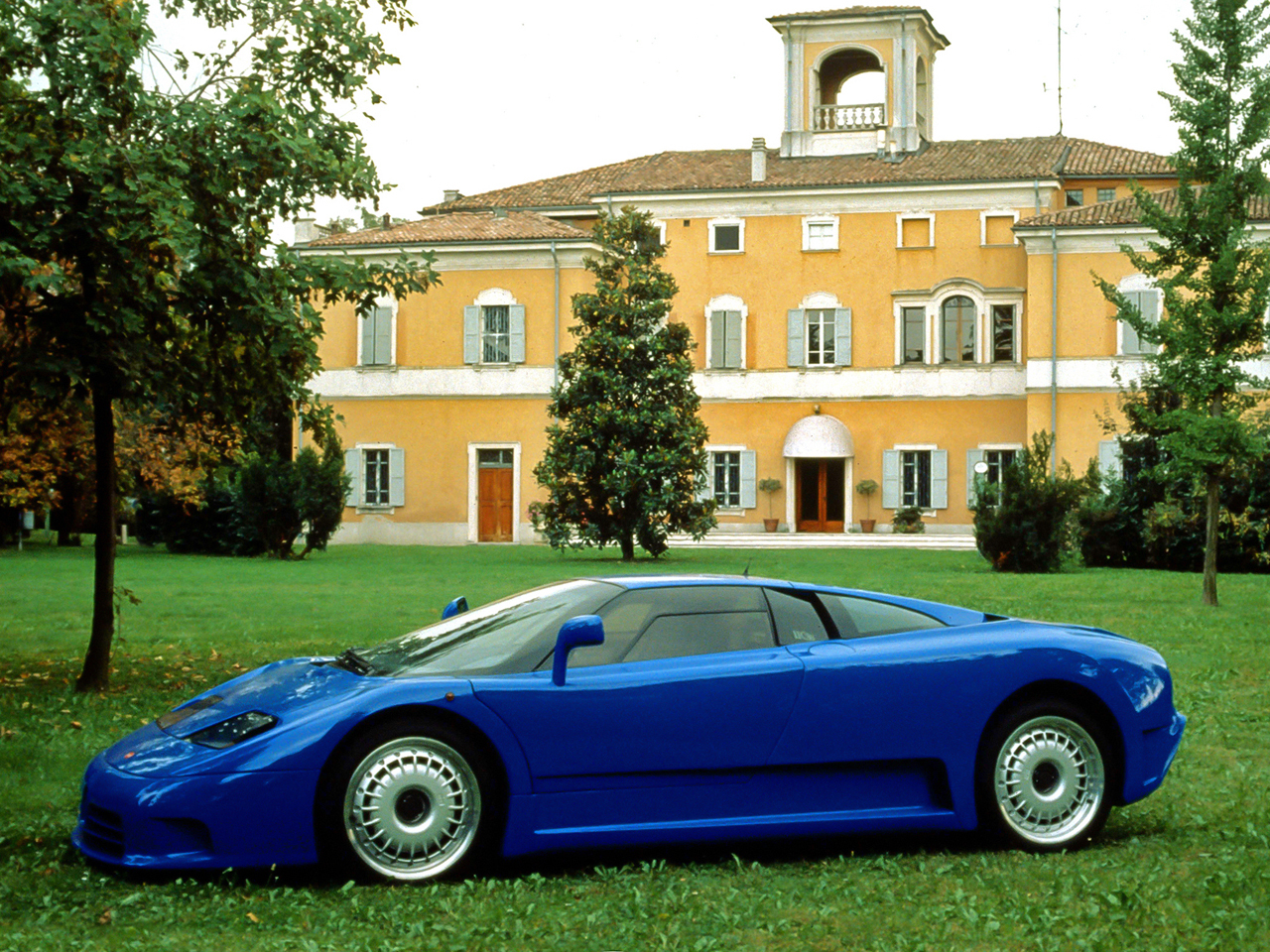 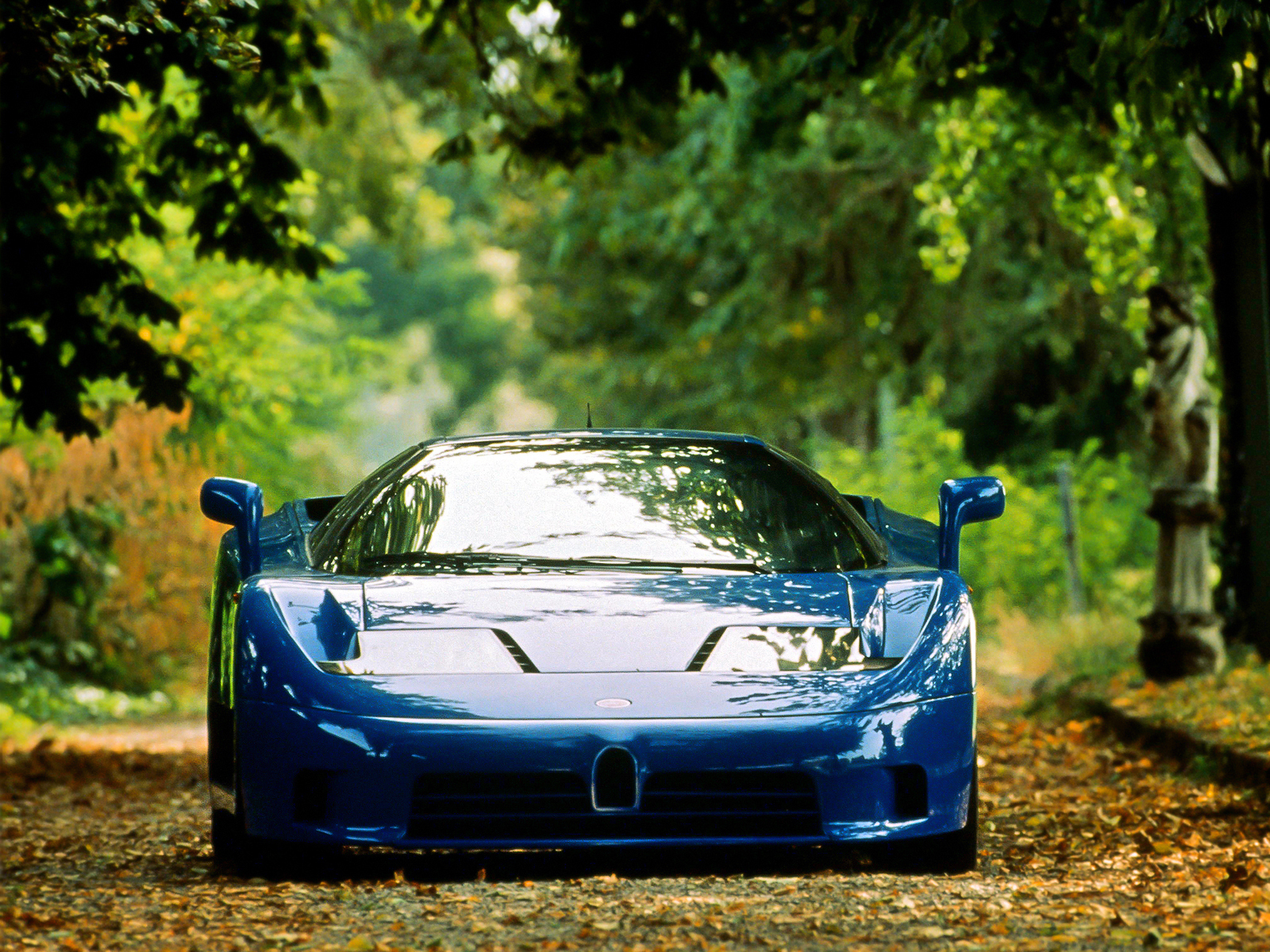 I hope you’ve enjoyed the story on the lesser-known Bugatti Automobili thus far! This article will be comprehensively updated going forth over the next few weeks in order to cover the most immersive elements of one of automotive history’s forgotten chapters.  Coming soon to this ongoing series: - EB110, triumph and tragedy. - Campogalliano and La Fabbrica Blu. - The car that could have changed the world. In the meantime, be sure to take a glance at some more insightful period photographs pertaining to this enthralling automotive creation. 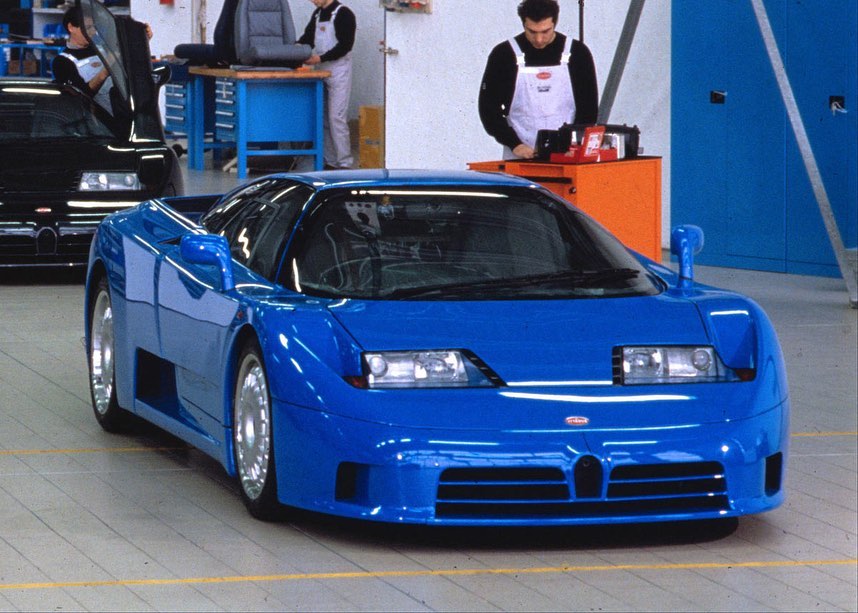 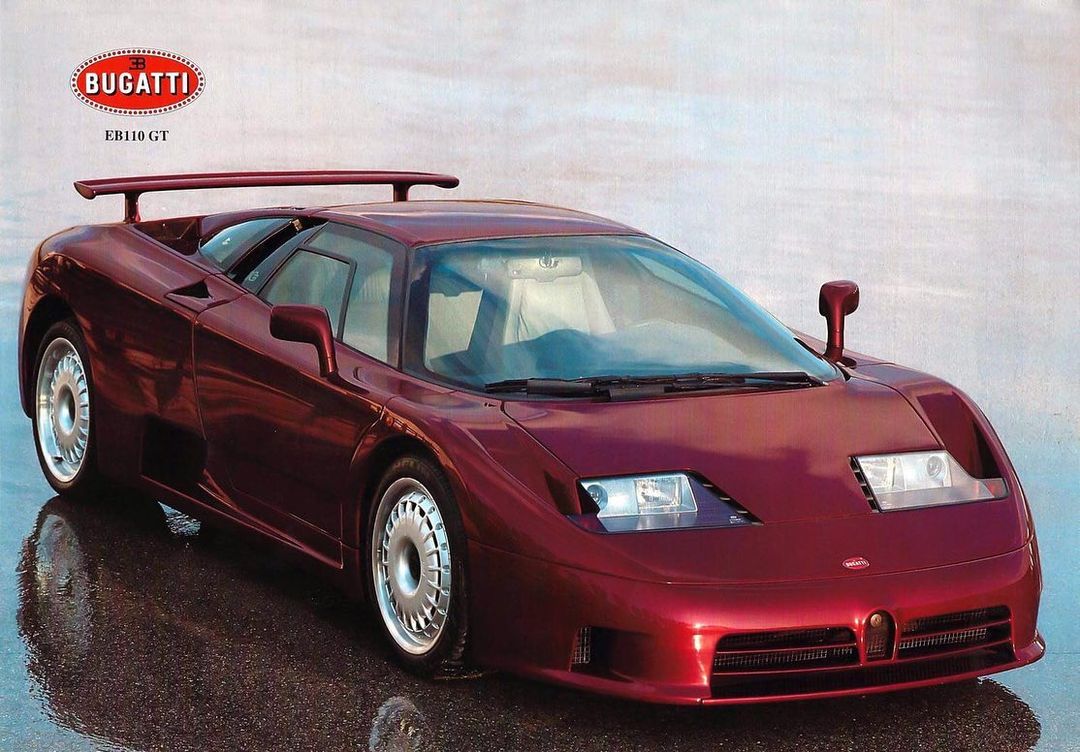 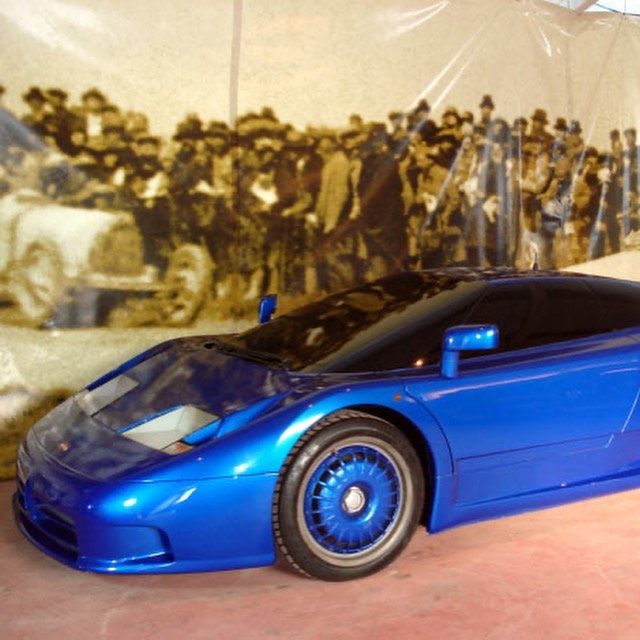 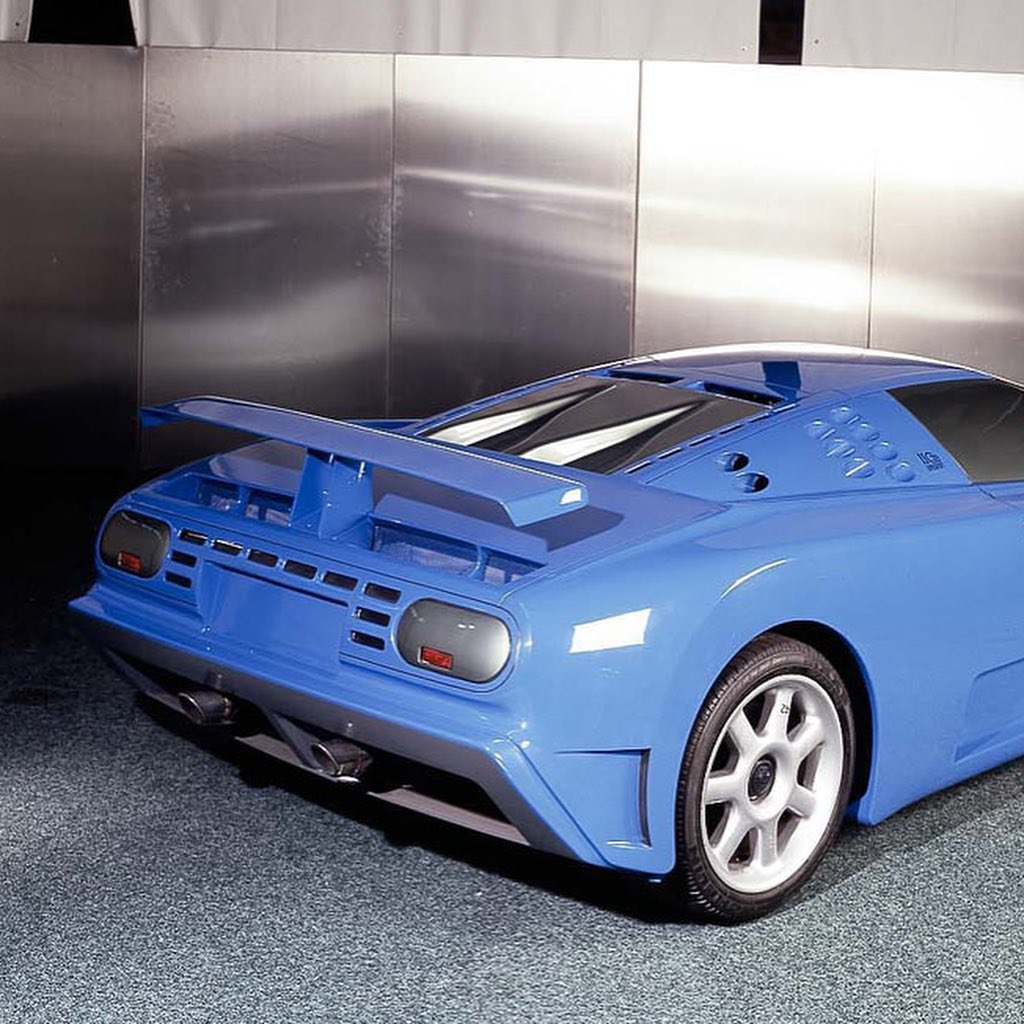